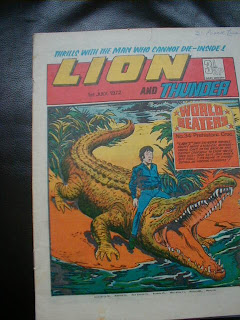 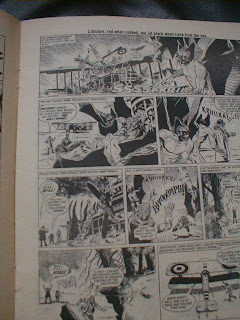 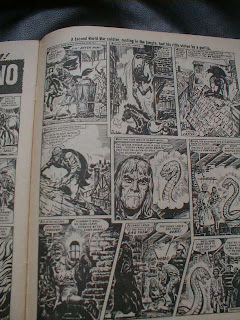 So how did the follow-up issue fare?
Well, "White Eyes" cliffhanger of the hero dangling from a river bridge over an awaiting Great White shark has him just climbing back up. The thrill of it. And then he's attacked by birds, but they only manage to rip a sleeve off his jacket. That's it - given up on that one.
"Black Max's" is resolved by his and Wilsons spiralling planes being caught by the Bat People and carried to the ground. And wouldn't you just know it, as the Bat People are about to finish off Wilson once and for all with their "death dealing power waves" (which involves a bit of pointing and going "kiiiiikkki"), the fuel tanks explode and they flap off.
"Adam Eterno". Just as i recover from the outlandishness of last weeks bear in a hood wearing a gold spiked collar, i get the double whammy of the follow on featuring a solid gold serpent with fangs of death awaiting Adam in the shop he has to go to. This strip is really revealing itself to be another Batman tv series - enjoy it as a child for the thrills and the action, and again for a different reason as an adult.
Posted by Mangamax at 05:07