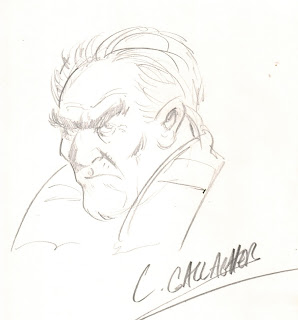 Spent a long wearing day at London's Expo yesterday and real sensory onslaught it was too, being predominatly Anime, gaming and small press titles.
But, the 2000AD stand was there and so too was Leigh Gallagher. I've many times here stated how Leigh is the worthy succesor to Lopez and Font with his incredibly moody B&W artwork on 2000AD's Defoe strip, and he's been top of my list for his take on Black Max.
When i asked Leigh for a sketch of the fella and thrust a reference pic under his nose, he only had a couple of minutes beofre needing to go to the next panel. But still produced this excellent head shot of the cranky old fella. Cheers Leigh!
Posted by Mangamax at 09:04 No comments:

The best ever Adam Eterno portrait? 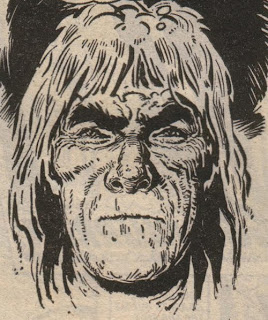 As well as Max's talented Bi-Plane in that issue of Lion and Thunder, we also have the best image i've ever come across of the immortal(ish) one. Stunning work from Lopez, capturing the strength and burden of the guy all in one moment.
Sublime. 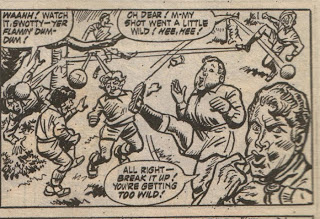 Going the other way, we have this, er, odd art in Carson's Cubs. Best i can say is its distinctive. And recognisible - whoever this artist is, he was using the same style 5 years later on Dredger in Action: 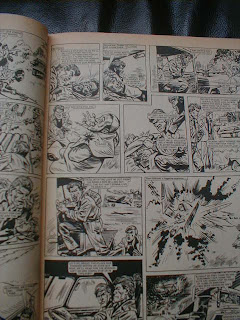 Posted by Mangamax at 02:24 No comments:

Cresta - its not frothy, man 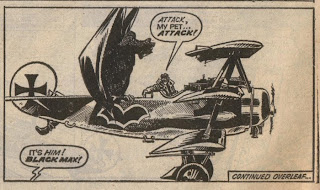 Before i get on to the issue this is from, i'd just like to show you seperately this here best-yet image i've come across of an occasional plot device in Black Max, that is: the outrageous notion that can he actually store his whacking great Bat in the tiny little locker that's just behind the cockpit.
HE would stuggle to get in there, let alone even a wing of the beastie. How does he achieve this? Is the inside bigger than the outside? Is Max REALLY good at origami? Who knows. Its just a bampot notion and totally in keeping with the spirit of the strip
Posted by Mangamax at 03:03 2 comments: 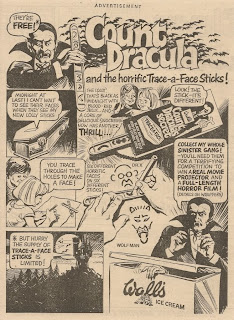 Yet another "they wouldn't do that now" example, the telly advert encouraged kids to "taste the blood of Dracula" or somesuch tag line, the ad here goes on about the blood red jelly, which apparently covered a "core of delicious snocreme".
What the hell ws "Snocreme"?
Never, ever heard of the stuff. Just Googled it and i'm still none the wiser - except that its "An all vegetable formulation".
Anyway, its good to see here the lolly sticks with stencils built in that had their time in the mid 70's, but best of all here is the idea that you can win " a real movie projector and a full length horror film".
That must've been an 8 or 16mm jobbie i guess and, back then of course, "full length" films usually meant 20 minutes of highlights, but what film would they've chosen to give free to teeth-dissolving-from-snocreme-nippers?
Posted by Mangamax at 00:15 6 comments: 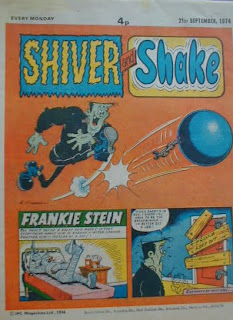 Second bit of bounty from 30th Century was this issue. Interested to have a butchers as its a good 20-odd years since i last read one.
Can remember back when a nipper not being too keen on cover star Frankie Stien and that's born out here, being a pretty dull affair with pretty pedestrian art by RT Nixon not being a patch on the great Ken Reid.
Inside there's a whole bunch of strips that i don't remember at all: The Ghost's Revenge, Shake, Blunder Puss, Riddle Me Ray, Moana Lisa, Ghoul Getters Ltd, Creepy Car. And The Ghostly Galleon, which seems to be trying for a serious, spooky tale but suffers from dodgy art.
Strips i do remember and thought "Hmmm, they're ok i guess": The Duke's Spook, Hire A Horror, Lolly Pop, Tough Nutt and Softy Centre, Odd Ball, Webster, Horrornation Street and Scream Inn - which i remember having great, moody art but here is a tad pedestrian: 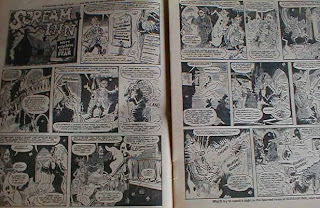 And strips that i loved then and still hold up now.
Grimly Feendish going after folks' washed wares: 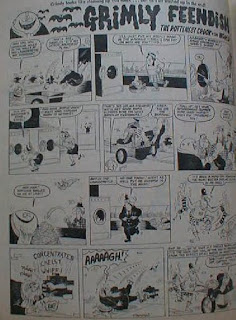 And the genius that was Sweeny Toddler: 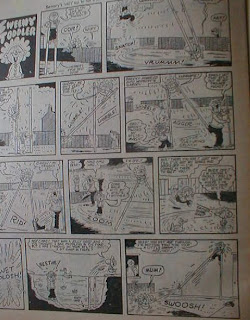 Best of all though is the brilliant Slippy Sloppy Horror Soap, a reader creation stunningly brought to life by Ken Reid in his back page "Creepy Creations" 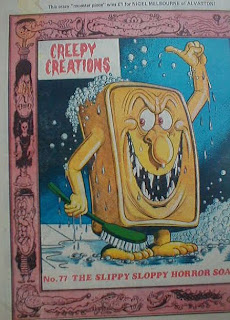 Posted by Mangamax at 12:33 No comments: 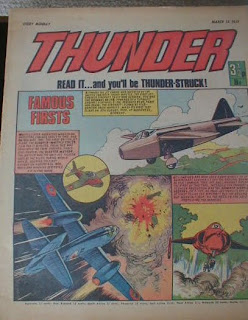 First comic to read from the bunch i bought in the 30th Century is also the most expensive. And that's because its the last issue before merging with Lion a week later.
So, lets have a look shall we? As usual, there's really only two strips of note for both the me now and the me then, Black Max and Adam Eterno. They're the first two after the cover and after them it goes steadily downhill having, in order, Cliff Hanger, Fury's Family, Dusty Binnns, Phil the Fluter, the Jet Skaters, Steel Commando, The Terrible Trail From Tolmec (yes really) and the Gauntlet Of Fate. 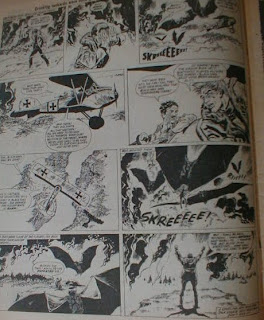 Back to what floats my boat, Black Max finishes a tale just in time for the merger. Not too much of note in this episode, apart from a curious line from Max: "I swear by the Bat-Blood of my ancestors... YOU shall be the first to DIE". Bat-Blood? Bat-Blood? What's he on about? There's never ever been any suggestion that he's somehow linked through history with the Bats, or that he may have Bat-Blood running through his veins. And i've not seen mention of it again in subsequent episodes. Just a made up curse just for this week or more? Like i say, curious. 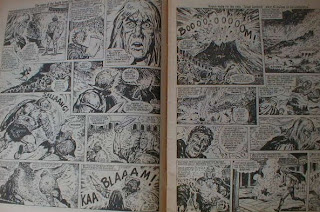 Adam Eterno wraps up too and its a classic, with the big Lunk not only having to fight a gladiatorial duel, but Vesuvius is just about to erupt and, to top it all, the mush he's got to fight is the greatest gladiator in the world. And wearing gold armour. Doh!
And he's got that volcano to thank - he's been cut quite a bit by the golden sword and the death stroke is just about to be delivered when it blows.
Lopez's art is simply astonishing, moving along at a breakneck speed, with some terrific moments - the eruption and the final shot of a vanished Eterno leaving behind his footprints in the deadly ash being tops. 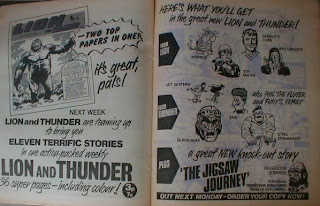 Final thing of note is the two page ad for the following weeks merger. A pretty crude lash-up of an affair.
"AIEEEE" WATCH:
Wee bit too early for the expeletive
Posted by Mangamax at 04:43 No comments: 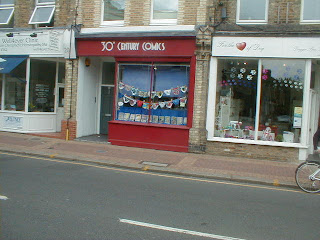 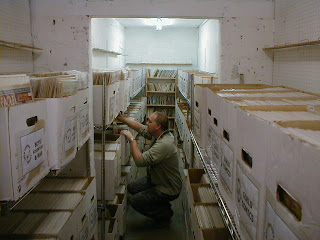 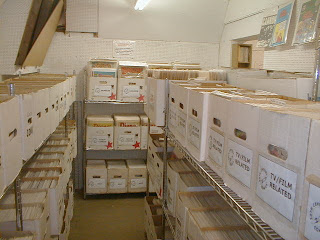 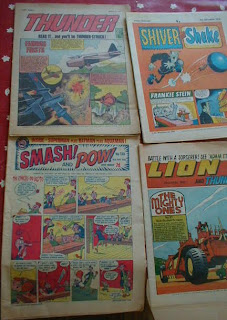 Me and the Bronze finally, finally got round to visiting this shop yesterday and, boy, were we glad we did.
What a terrific shop, a true throwback to the 80's when they were all independant and before they became supermarkets all selling the same stuff.
Here you get the latest American titles and graphic novels on the ground floor, go downstairs though and you're in British Comics heaven.
Hundreds upon hunderds of comic boxes filling every space, full of every title ever.
A fantastic place where you could spend a fortune. And a charming, knowledgable owner (sorry, didn't get your name) and a lovely way of spending a Sunday morning.
We'll be going back regularlly i'm sure and here's what i got this first time.
And here's the link to the shop. HIGHLY recommended. 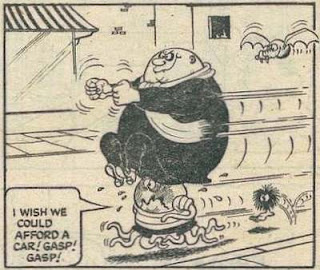 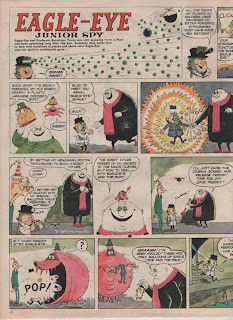 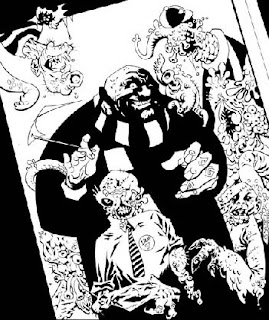 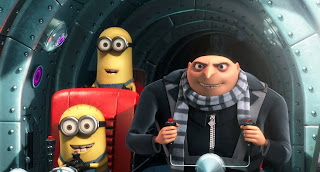 Inspired by photos of my local comic shop owner dressed up for Free Comic Book Day on Saturday looking more like Mr Fiendish, i thought i'd take another look at the fella.
Reading a few strips, its become apparent:
(A) How unfair it seems Grimly's been over-looked in the vast pantheon of Leo Baxendale's creations.
(B) How unfair it is that folk of a certain age know the name only for the Damned song.
(C) How unfair it is that folk under that age know him, albeit in a different form, in last years "Despicable Me" - a blatent swipe, being the tale of a super-villain aided by diminutive, strange creatures.
Will be going into the original more, but know i'm going to come out of it with the oft-muttered "why isn't there a collection of these?"
BTW, i enjoyed spotting him in the "Albion" series a while back but, being a serious version, kinda lost the appeal of the character in the first place, yes?
Posted by Mangamax at 13:17 3 comments: