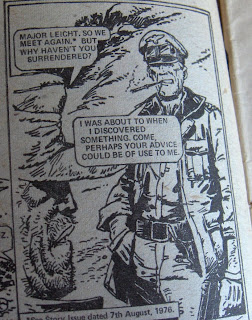 This guy i only very vaguely remember, and i knew him as the German version of Major Eazy - but didn't have any issues of him since i were a nipper.
But me and the Bronze repaid a visit a while back to 30th Century Comics, and i bought this issue of Battle for the really lovely Ezquerra cover of the Main Man. 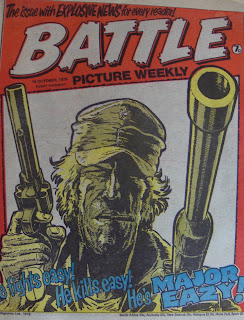 Pleased to have it for just that reason, but doubly chuffed to find it has Leicht in the strip.
And, being Eazy, it was typicaly off the wall.
He's in Italy just as Germany surrenders and is determined that he'll beat the Yanks to the Brenner Pass, seeing as he's fought for it and they're just there for the glory.
He meets his equivilant on the way and both decide to put such silly trivial things as war to one side to beat the Nazi's, who're are determined to blow up the very bridge the Americans plan on using to get there.
Its typical Battle barminess - neither has the means to stop the gun from doing the dasterdly deed, so instead drop a grenade-laden tank against the dam wall, blowing it up to wash the bad guys away.
It ends with Eazy indeed beating the Americans to the objective, but Leicht is mentioned no more.
No idea if he appears again, but the tag at the end saying from now on there'd be the early adventures of Eazy, guess that was it.
The only other thing of note this time is the incredibly vivid depection of a Nazi lookee-likkee of Churchill being blasted by Mike Nelson in "The Eagle Must Die!" 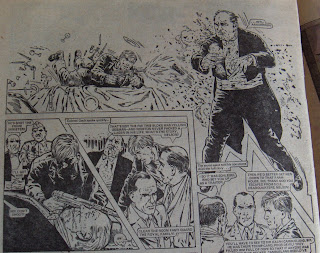 "AIEEEE" WATCH:
A short "AIEEE!" from a German in "Yellow Jack"
A really rather over-long "AIEEEEE!" from a Nazi in "The Bootneck Boy", who'd only been thumped by a rifle. Wimp.
Posted by Mangamax at 12:00 No comments: