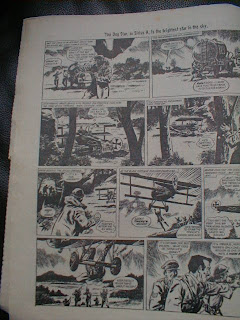 Issue 26th December 1970 of Thunder and episode 12 of Black Max. Significant in that its here that anyone other than Wilson comes across the Bats and lives - two Allied airmen find Max's plane with the hidden compartment and release the King Bat but manage to flee.
Also have to add the latest "what're the odds eh?" moment from Adam Eterno - he's in the thick of it in WW1 and up against a German officer in hand to hand combat, which shouldn't be a problem but - oh NO! What's this? He's got a solid gold ceremonial sword!
I know i keep harking on about the amount of gold that seems to be everywhere Adam goes (maybe he's in alternative universe where's its as common as steel is in ours) but don't get me wrong - i love the character, the concept and the art (but not in these issues for that last one here).
"Aieeee!" Count: 0
Posted by Mangamax at 08:42

Thunder only ran for 22 Issues before joining up with Lion ;-)Love your rants on the strips BTW :-)

Wotcha Capn'.
Yup, my Max bibliography's well underway now - got spreadsheets for both Thunder and Lion & Thunder and am enjoying buying up issues and filling in the blanks.

I know i could read them all on the Net and have done with it but (a) it takes the fun out of tracking down certain issues, and (b) even though i might only read two strips per issue, its a joy to look through them. And the smell! An envelope with five 1971 L&T's turned up today and the wiff when i opened it was unreal!