Lion and Thunder 28th August 1971 - the thrill of a squirrel

Thinking it time to fill in a bit more of my Black Max knowledge, I've just picked up this issue.
The cover boasts "Sinister Air War Thrills" with Max: 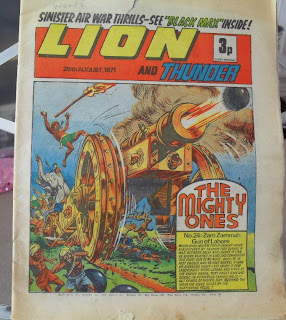 And the strapline up top also promises a "Grand New First War Spine-Chiller", but its odd in that two of the three pages of the strip are given over to a conventional war strip of Wilson being wounded in battle and sent back to London to recover: 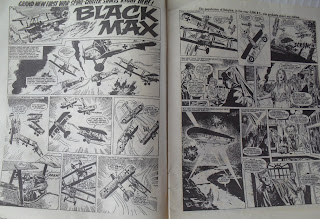 Its only when the page is turned that we get our supernatural fix, with this fantastic sequence of the Giant White Bat breaking in to kidnap the scientist: 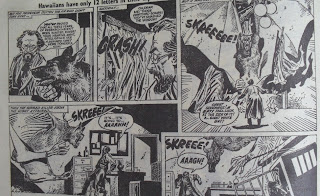 But, wouldn't you know it, plans are thwarted when that whacking great monster is scared off by the brainboxes pet dog: 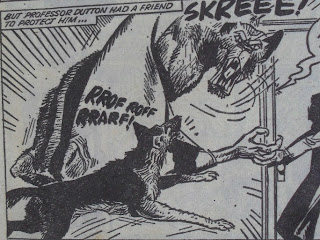 And the strip ends on this superb panel of an incredibly moody London skyline and Max realising somethings wrong. Bet that's a spooky castle affair he's living in: 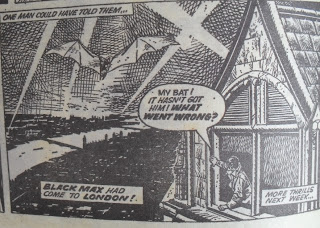 In the rest of the issue, not much to report, all kind of dull. Even, oddly, Adam Eterno.
The only other highlight for me is Fury's Family, a strip I've never cared for but always take a look at because of the incredible art it always sports.
This time I saw something so outlandish I had to go and read the strip, and i'm glad I did as it has a feature so bizarre and odd and a true example of why I love the 60/70's British comics.
Join me as I fill you in.
Fury needs to stop the bad guys car as it heads off down a road that has no turning for ten miles.
Off he runs to the nearby telephone pole, with a starling sat on the wire.
"Theep Theeka! Skreek Skree Throoka! OUICKLY, speckled black one!" He calls out. Doesn't much sound like bird speak to me, but off the bird goes, pecking at the wire, sending a signal down them.
A few miles away the message is heard by a bunch of starlings, who respond with "Skree! Theep Thep Thikka!"
And then, "From starlings to squirrels and from squirrels to the far-ranging stags..." the message is passed on, with the stags causing a rock slide to block the road and stop the bad guys.
Genius, genius stuff and, if you ever wanted to see a squirrel talking to some stags, here you go: 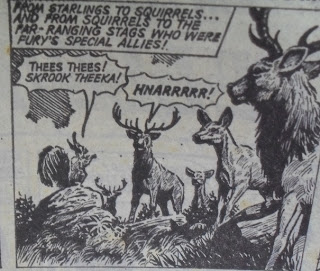