An exclusive on the way...

Not saying any more right now, but hopefully before long i'll be sharing something with you guys never, ever seen before and totally in keeping with this site.
Ohhhhh, ain't i enigmatic?
Posted by Mangamax at 09:50 No comments: 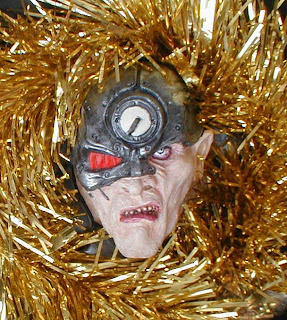 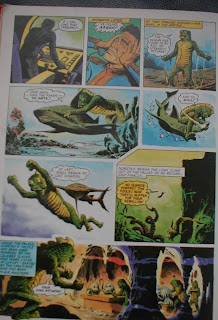 With the snow buggering up the plans, i've a bonus morning here at home. So thought i'd give you number 4 in my countdown.
The Pow! annual of 1971 seems to be quite an oddity in that, instead of its usual mix of Marvel reprints and British humour strips, we were given 10 all new origin tales of superheroes and villains.
The were mostly patently rip-offs of established DC and Marvel characters, but given the usual for the time British bizarro spin on things. That made them distinctive but, even more so, was the fact that the art seems to be all from the Spanish studios, given them an even odder and more surreal feel.
Both aspects made a huge imapact on the 9-year old me, no more so than the tale of "Norstad - Ruler Of The Deep!".
A despot ruler of a medievil-style underwater kingdom, he's deposed, dumped into the depths, loses his strength, forms a mental link with explorer Mike, gets his strength back from him whenever Mike's asleep, gets back his kingdom, rises to the surface, runs amoke but then flees back to the depths when Mike wakes up.
All that in 9 pages.
Great, mad stuff.
And the reason for posting is this page making it my number 4. Its a combination of the image of Norstad killing the shark by sitting on it and punching it to death. And his return to his palace to find his people had been over-powered by their jellyfish slaves.
I mean, c'mon - have you ever seen anything anywhere punching a shark to death? or ever thought how jellyfish could take over a kingdom?
I know i hadn't. But spent ages studying those two panels and pondering it.
And that's why its my number 4.
Posted by Mangamax at 03:03 No comments: 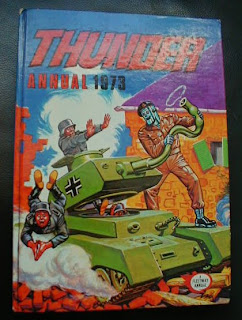 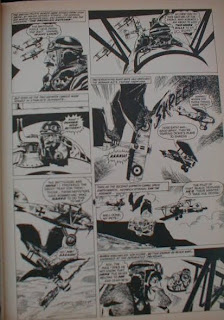 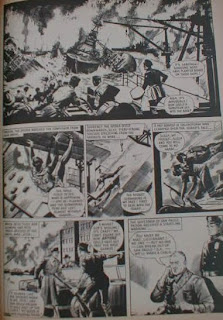 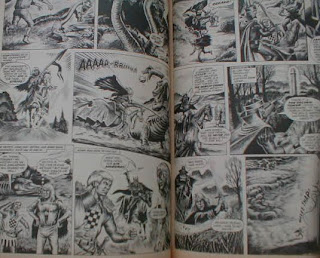 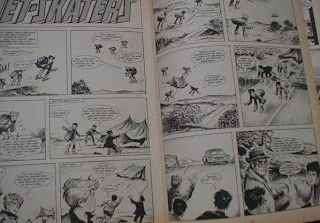 As this is my last posting before the big day, thought it apt to take a look at a staple from British childrens pressies, the annual.
So here we are with Thunder from 1972 and, inside the typically lurid covers, there's a real mixed bag - but i'll focus on the strips that float me boat.
First up, The Black Max. The nature of the annual dictated that all the tales had to be self-contained stories - easy for the comedies, less so for the drama one's. Usually they were rather substandard in both script and art but here we have Font doing sterling work worthy of the weekly and a nice, barmy tale of Max being courtmarshalled for interfering with "The Prussian Butcher"'s plans of dominating the skies. Resigned to his fate, he decides to kill the hated Wilson before his arrest, only to find Wilsons plane that he shot down actually was piloted by the Butcher, getting him out of the fix. As i say, barmy - but brilliant - stuff.
Top notch art on The Spider. I look and marvel at the crosshatch detail in the whole strip, but the standout has to be this stunning shot of the ships. SUCH effort put into it. I'm in awe.
Adam Eterno bears out what i said about the art in annuals. Rather duff stuff here, not at all what we'd been used too. Not so jarring though than if it was set in the usual Victorian/Elizebethen eras, here the total lack of moodiness is helped that its in Arthurian times and in broad daylight. Makes it more fairytale-like.
Last to thing to mention is Jet Skaters, a strip i wasn't too keen on, them coming across as some sort of Famous Five relatives. But i look at it now and still feel the urge to have a pair of those boots.
"AIEEEE!" WATCH: Its 1972, guessing before the exclamation was born. Instead we have mainly derivitives of "ahhhh!"
Posted by Mangamax at 05:19 No comments: 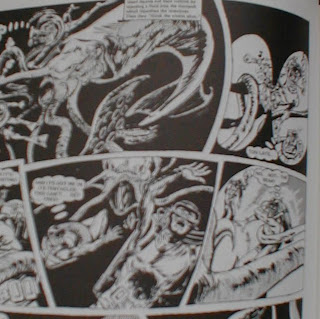 I'm sure we're all the same in that there are images from our comic reading childhoods that have stayed with us all these years.
I'm talking of snapshots from a strip that have real resonance and, in some cases, sum up what made the tale so special in just one image.
Been having a think about what are mine and have tried to boil it down to just five. And here's number five.
Hookjaw was nasty from the go but it wasn't until a few weeks in that we saw folk being despatched in manner other being chomped on. Here we have Pat Mills (really) have his stomach bitten out and his insides sucked out by a giant squid.
If that'd just been text i'd have been appalled but to actually SEE it was a huge shock and i came back to this episode time and time again to take in the horror (surely the aim of Action from the off).
Posted by Mangamax at 07:57 2 comments:

Know what floats my boat from way back then but i'm kinda curious what floated yours (assuming you're about my age) sooooo.. time for a poll.
Now, what this is is not what you think now, looking back through rose-tinted what-nots, but more which title had the biggest impact on you waaaay back then when you were a Sprog and reading each issue for the first time: