Can you spare a kidney?

Blimey, has one of these ever appeared for sale before?
The almost mythical last pre-ban Action goes up for sale, one of only 30 printed:

Right, lets take a look at one of my Welsh bargains shall we?
And lets start with a title i knew i bought to begin with (but didn't we all until the free gifts ran out?) but i'm thinking i dropped pretty quickly after Action started.
So it'll be interesting to see what Bullet was doing to compete with the young upstart. 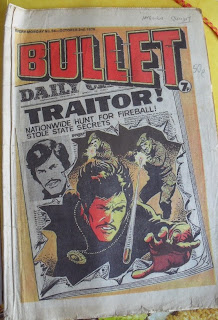 Lovely cover with Fireball bursting out of the newspaper there, while proudly sporting his Fireball badge. As soon as i saw it, i remembered the thing but at this point didn't realise just how blatently it'd be promoted this issue. 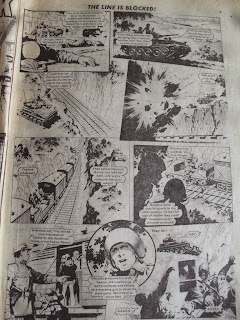 Turn the page and we have "Frontline UK", a strip i'd totallt forgotten about until Bear Alley Books announced a while back that they were going to reprint it. As soon as i saw Ian Kennedy's stunning art on their site, it all came flooding back though (especially how i had my Airfix Scorpion Tank in all sorts of recreations in my bedroom) and i really must get that collection sometime.
In the meanwhile, i'll make do with what's here.
Boy, its "Invasion" from 2000AD isn't it? But a year earlier - instead of Volgs we have the Yellow Moon invade Britain, instead of a tough guy hero with a surname starting in "S" in Savage we have Strong.
All great fun, with fantastic art from Mr Kennedy. 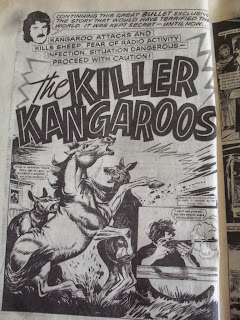 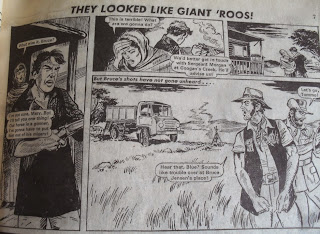 Next, we have "The Killer Kangaroos" - an appalling piece of rubbish, with terrible art and cliched, stereotype characters (they're Australian and they're called Bruce and Blue), the only thing that can be said of it, and its a very slim thing, is that it kinda, sorta, prempts "Shako" in the 2000AD to come. Or its a "Hookjaw" knock-off. 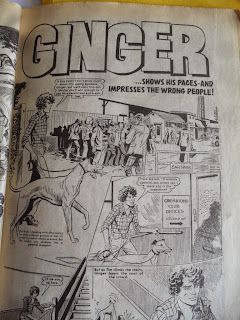 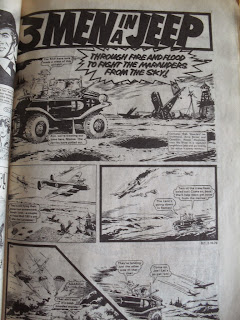 I'm going to skip over "Ginger", the tale of a boy and his dog, and "3 Men In A Jeep", three men in a jeep, as they're so bog-standard i forgot each panel the instant i finished reading it. 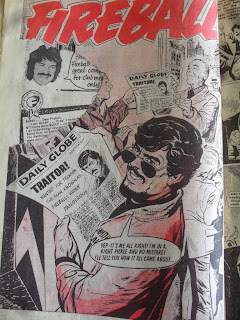 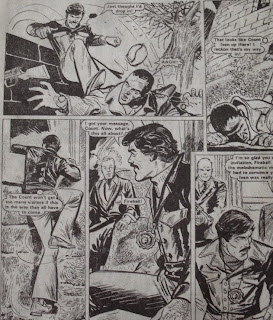 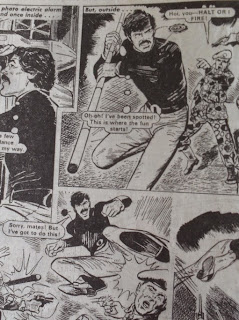 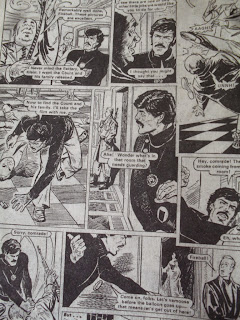 And then we're on to "Fireball", the main strip - you can tell because he's in the centre and has a bit of colour. Coming across as a mix between Our Man Flint and Jason Wyngarde but looking more like Jimmy Hill, its a yawn of a tale, made interesting by just how blatent his medallion was. Whats the deal here? Its in every blummin' shot, whether it wants to be or not. I don't know if s there to remind readers who had one too that we're all part of the gang, or there was a way to buy them and this was product placement, but, boy, its jarring. 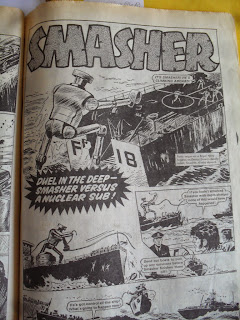 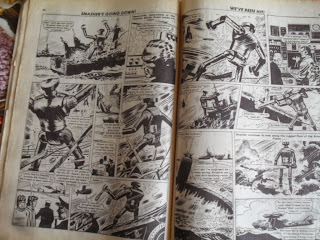 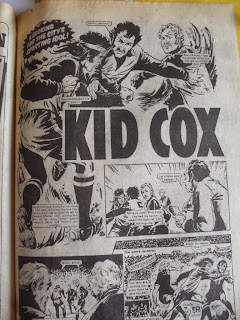 Final two strips are as duff as the two i skipped above. I think i'd have been drawn to "Smasher" as its a tale of a giant robot, but one read would've put me off.

"AIEEEE!" WATCH:
A 100% perfect one from a soldier being overturned in an armoured car in "Frontline UK"