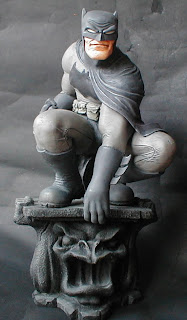 Been having a sort out of my den and it occured to me that i've an awful lot of Batman stuff, along with 40-odd years of back issues.
So thought i might as well set up a Blog to have a ramble about it all:

Johnny Red - Not hanging around 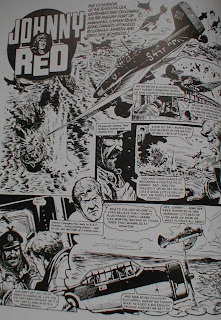 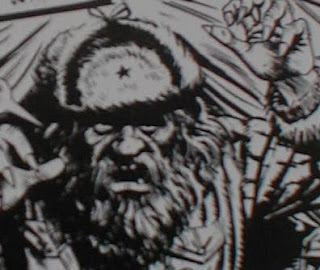 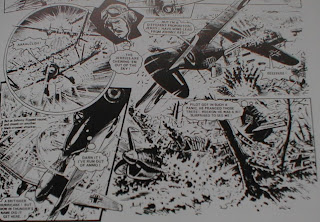 Blimey, talk about hit the ground running.
First page of the first episode has only five panels. In the tiny amount of space we've found ourselves in the middle of a German attack on an Allied convoy, seen that the only Hurricane can't launch because its frozen to its launch rail, been introduced to Johnny Redburn, learn his nicknames "Red" and we get a flashback to how he's aboard rather than flying in the RAF.
In 5 panels.
Over the first 4 episodes, only 3 pages long, we get Johnny saving the convoy, fly off to find somehere to land, meet up with the Falcon's, fights with them and join them.
All in just 12 pages. Like i say, blimey.
Really miss this breakneck style of storytelling these days, where everything seems to either have a backstory you need to know to understand, or the tales told over multiple titles.
Know what i prefer.
Of note, of course, is Joe's STUNNING art with his trademark unique, gritty characters (Yakob's face especially so here) and brilliant action sequences already in place long before Charlies War.
Posted by Mangamax at 03:48 No comments: 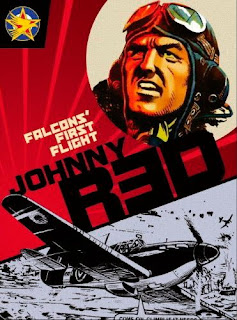 Very surprised to see this in FP today, what with the massive delay and all.
Its got £3.00 off but i would've snapped it up anyway as Titan have gone the quite excellent Charlies War route of hardback, actual size and very clear reproduction. The cover is a bit different to this, having credits for Tom Tully and Joe Colquhoun and Johhny's Hurricane has been zoomed in on a bit more, losing the clumsy looking part of a dialogue baloon.
Like Charlies, we have an intro - by Garth Ennis - and a factual piece to do with the time by Jeremy Briggs which, oddly, has frame blow-ups to illustrate the points rather than contemporary photos.
Only had a flick through since coming home, but everything else is going to have to be pushed to one side.
Posted by Mangamax at 13:06 No comments:

Getting Major Easy out of a scrape 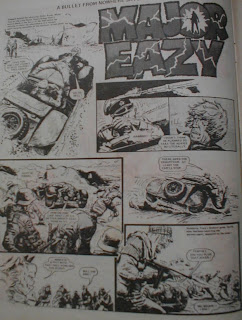 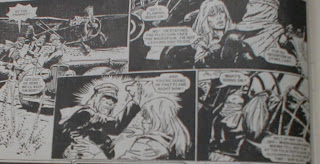 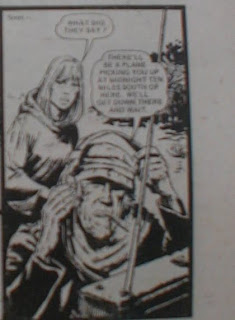 Long term readers may remember me having a look at part one of an Easy tale in which, at the end, rather than threating to shoot the fella, the Nazi commander chose to tie him upside-down on the bonnet of his field car and drive him into a wall.
Typically barmy stuff - but how does he get out of it?
Taken a long time to get round to tracking down part two, but finally have it in me mitts.
And the resolutions just as offbeat - the Agent Easy's working with shoots the driver, making the car veer away from the wall and come to a stop. Easy asks the obvious: "You do realise the car might not have swerved?" To which the agent has the brilliant comeback: "Don't worry Major. If it hadn't, I'd have shot you before you hit the wall".
One panel that sums up why i love these tales so.
Interesting to see in this episode the rare instance of violence towards women as Easy knocks out the agent so she'll get on the plane. Its handled delicately, with his fist not anywhere near her face and actually looks redrawn - the hand, and especially the thumb, seem to have much thicker lines than the rest of the panel.
Also of note is Carlos's strangely attractive females. I can't quite put me finger on it why they appear odd. Thinking though that maybe the faces are a tad too long and the mouths are the same as the mens? Certainly distinctive though.
Posted by Mangamax at 03:19 No comments:

Back with Valiant & Vulcan 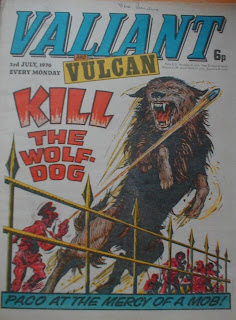 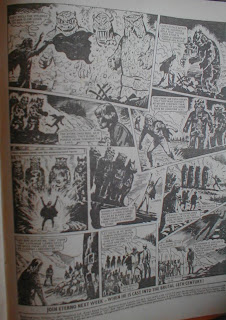 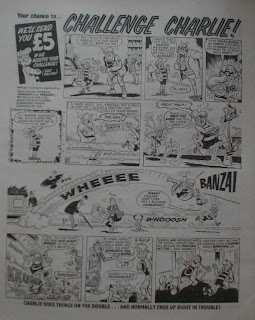 Well, hope you had a jolly Christmas and the New Years started well?
Thought i'd kick off this year with a title i never got at all way back then. Of course i'd bought Vulcan but never cared at all for Valiant, thinking its characters were just not interesting.
Which put me off buying it - that and the fact i was deeply into Action and Battle at this time, along with every Marvel UK title going.
But i thought it might be worth taking a look at what i was missing.
Hmmm...
Lets get the naff stuff out of the way first shall we?
On the cover we have "Paco", half dog half wolf on the run from his wicked former owner. An odd tale involving him just running away, while various inept baddies fail to shoot or trap him, getting in a fix themselves. No style, no wit and no points of interest. Covers nice, having him come across like the Hound Of The Baskervilles, but the art inside is pretty duff.
"Well Red" (yet another football mad boy trying to make it), "Billy Bunter", "Death Wish" (a D Day Dawson clone), and "Captain Hurricane" show why i never bought the comic, while "One Eyed Jack" is just about passable.
"Soldier Sharp" is in here, but the art and script have gone really downhill - no humour or inventivness now, making him just be a nasty little creep.
Was thinking i'd wasted me money but, there at the back, is the barmy genius of "Adam Eterno" and all was right again.
Out of all his barmpot golden scrapes he's gotten in, this ranks pretty high - the fellas in Celtic Britain, up against "Celtic Stone Gods" who just happen to have gold ore in them (ain't that always the way?). He's resigned to his doom at the hands of these bad boys - until he realises that they're scared of limestone dust. Yep, you read that right, these stone GODS run away from a bit of dust. That's got to be up there with Green Lantern's weakness being the colour yellow as the lamest plot device going. Armed with this info he gathers up the dust into solid lumps to pelt them with, until "... the deadly lichen is being killed by slaked lime! Unnatural life ebbs from the gold-tainted stone".
Brilliant stuff, and well worth the price of admission.
There's a curiosty in here too - a pretty unfunny strip called "Challenge Charlie!", which has either an artist doing a fair Ken Reid immitation, or the great man wasn't on top form.
"AIEEE!" WATCH:
A perfect 100% "Aieeee!" from a Tommy in "Soldier Sharp"
A "Aaaeeee!" variation from the guy being dissolved in coolant in "Paco"
A short "Aaaee!!" from a Celt in "Adam Eterno" but, as he's being shoved down the throat of a Stone God, guess we can excuse that
Posted by Mangamax at 02:13 4 comments: