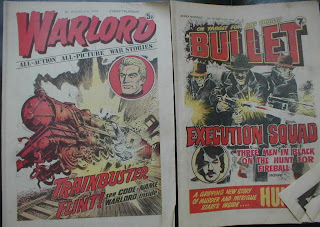 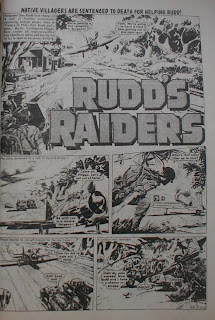 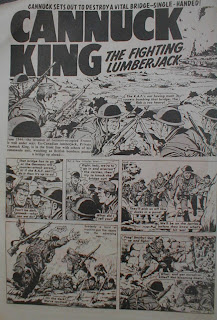 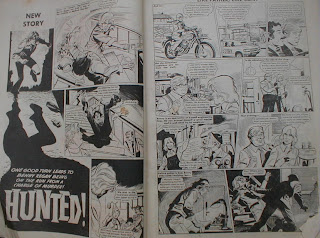 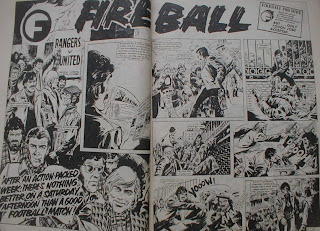 Had a trip down to Hastings and, as usual, popped into the Albion Bookshop for a fix of 70's paperbacks and comics.
Have said it before, but it really is a recommneded place - an old school secondhand bookshop, full to brim with clutter and coming across like the sort of place you'd expect to find Peter Cushing in while he's in one of those Vault Of Horror anthlogies.
Anyway, picked up an issue of Bullet and Warlord and, boy, two classic examples of why i don't remember them much and why i embraced Action so much when it came out.
Warlord 21st June '76 is duff beyond belief - crappy stories with crappy art. Two things of note though: "Cannuck King" conforming to the staple in UK comics of the heero having a talent or somesuch that, would you just believe it, keeps coming into situations that addresses it.
Great with Adam Eterno's fear of gold, not so great here where the hero used to be, er, a lumberjack. Makes you wonder if the script writers were scratching their heads week in and week out trying to find ways of incorperating tree felling into the action. This week we have him hollowing out a log so he can hide inside it, float down the river and blow up a bridge.
Hmmmm... How i wish he'd been stationed in the Sahara and then see how he gets on.
Other thing of note is "Rudd's Raiders", a complete Darkie's Mob variation, with one man leading a team behind enemy lines, causing trouble for the Japanese. if that wasn't close enough, the title font is EXACTLY the same.
Bullet May 22nd '76 is a tad better. "Hunted!" has a lad trying to prove his innocence after being accused of killing someone who's taken him in with a wrench. Its pretty forgettable, aside from the heavy handness of setting up the wrench as the pivotal piece of evidence. He's shown his room and the bloke mentions "I was about to put in a new wash-basin but i don't have the right tools". Up pipes laddie: "I'll borrow a WRENCH from work tomorrow", next panel he borrows it, next panel its "I'll just leave the WRENCH on the back stairs". Hey, do you think it'll be significent somehow?
Fireball is the only other thing of note which bizarrely, spends half the story dedicated to football matters before getting on to the spy stuff.
Posted by Mangamax at 06:17 No comments:

Mike McMahon's finally got a Blog 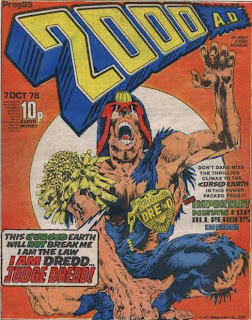 Very happy to see that one of the true giants of 2000AD has started Blogging. One to keep an eye on. 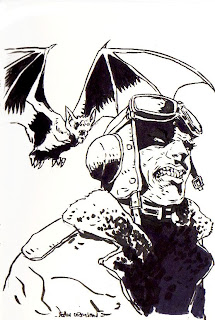 Just bought Dean's sketchbook, which is filled with some brilliantly disturbing imagery.
A great book made even greater in that, for a wee bit more, Dean will do a sketch of your choice at the back.
As he's reknowned for his moody, downright scary work, had no choice but to ask for his take on Black Max did i?
Posted by Mangamax at 03:17 5 comments: 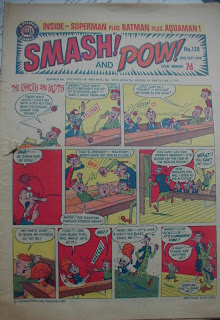 Another title i picked up from the trip to the 30th Century, this issue from Sept 1968 features classic Gene Colan Daredevil, Steve Ditko Spider-Man and REALLy duff art on the Batman/Superman reprints.
Three things of note with the UK-originated strips: 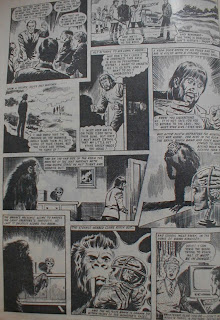 This odd one called "Brian's Brain" which features our hero "Brian Kingsley... the possessor of an astounding artificial brain." Not only do you get a brain in a jar, its left "in the strange house belonging to Julius Pilt". Who happens to control a prehistoric creature. What a strange little strip, that i've never heard of. Might try and track more down. 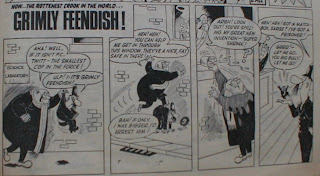 Grimly Feendish is limited to only a criminal (ha! gettit?) four panels, but is still fun. 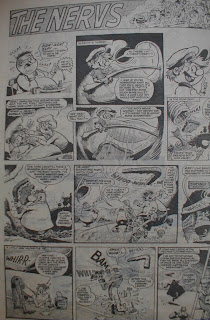 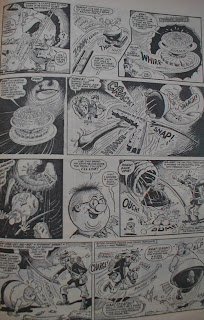 Best thing though, and making it well worth the price, is exquisite Ken Reid work on the Nervs.
Genius, genius stuff
Posted by Mangamax at 04:09 No comments: 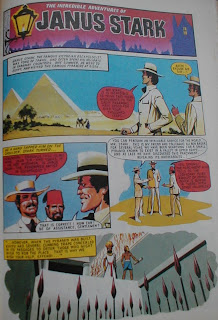 Just come across this, and what an unusual treat it is - a nice self contained story in full colour.
Normally, that'd be a ghastly notion, not suiting the Victorian setting or the character at all, but it works here in that Janus is far removed from the sooty streets of London and is instead employed to brave the traps of an Eygptian Pyramid to retrieve a piece of treasure, predating Raiders Of The Lost Ark by a good 6 years. The thing that doesn't work is the strange decision to colour in some of the speech bubbles too, which is horrible and really detracts from the art.
Speaking of art, i'm unsure who actually did it. The above splash page screams Ian Kennedy, but the close-up has me doubting. But the figure directly below looks like classic Kennedy. So i'm going with him. 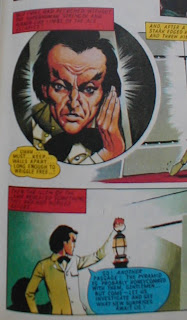 Whoever it was, also did the Raven Of The Wing exactly the same. 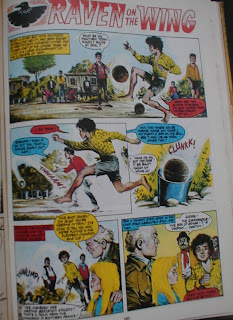 I'm guessing both were done in colour as they were for the 1973 Valiant annual, a much more colourful title than its weekly brother. 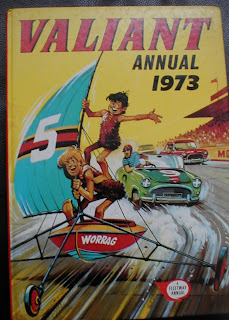 Also in this copy is the resolution to a Kelly's Eye story i've featured here before, where he's up against the dread vampire, Count Varga. Except he's not. In true Scooby Doo style, he's revealed to be the lowly manservant all along and the terrifying giant bats turn out to be helicopter-like craft. Operated by midgets. Brilliant stuff with brilliant art by Lopez. 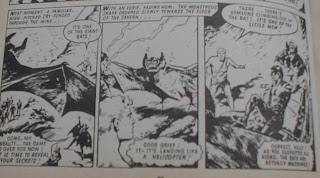 The return of Jesus Redondo 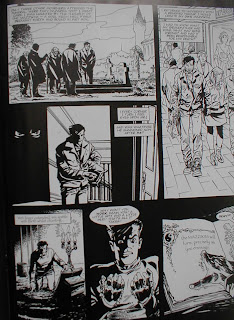 How nice it is to open this weeks Prog and see one of the classic artists from yesteryear making a return after such a long time away.
His style's changed somewhat, especially with regards faces - this one at the bottom looks more like Brett Ewins when he was doing Bad Company for the Prog.
But figurework and longshots are still the same, as in the panel directly above that porrait shot.
I've said it before, but Redondo is yet another one of those artists who're long overdue a re-assesment and to be given the credit and accolades they deserve.
In my opinion, the bloke was never better than on Starlord's Mind Wars: 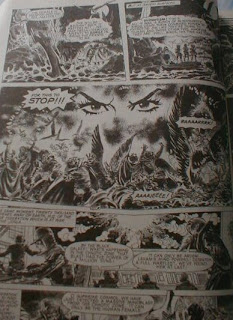 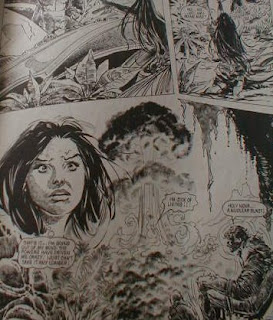