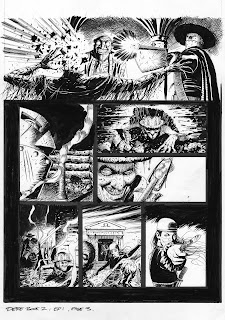 Leigh Gallagher's begun to sell some of his artwork from 2000AD's "Defoe" - see link to his Blog in the sidebar to the right - and, though i can't really afford it, i just had to have one.
As i've said numerous times here, Leigh's work - and Defoe especially - is carrying on the tradition of British boys comic strips from the 60's and 70's, with his incredibly moody and evocative black and white art depecting fantastically imaginative characters and situations.
So its a real thrill to have a page in the "flesh" and its sitting proudly next to my "Janus Stark" page, a truly suitable place for it to be.
I've chosen this page as we get a bunch of characters from the strip along with a dose of ultra-violence.
What's not to like?
Top Bloke that Leigh is, he also included this, an original prelim for Defoe from back in 2006.
Cheers Leigh! 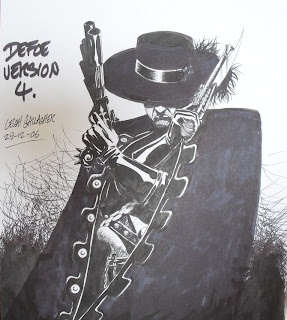 Posted by Mangamax at 03:53 No comments: 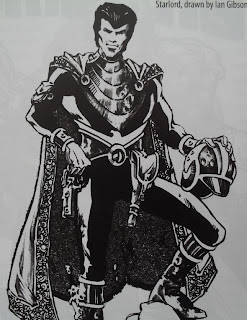 Better late than never, but at least i have it now.
Another corker of a read and i'm liking the mix of strips and articles - the more this title goes on the more it reminds me of "Warrior" and that ain't no bad thing is it?
Shame to see my favourite new strip, "Recovery Inc", taking a rest for a while but at least it'll be back and "The Devils Heritage" is off to an intriguing start.
Of course, the old school thrills are still the best for me and its nice to see "Starlord" having one of its infrequent peeps out from behind The Mighty Tharg's shadow.
And so nice to have the Man himself shown here in this classic piece by Ian Gibson. I loved Ian's work around this time and Starlords face is very reminiscent of the work he was doing on "Captain Kronos" shortly before over in "Hammer House Of Horror".
Top Thrill is of course Hookjaw and there's two things of note for me this time.
First up, this very, VERY odd image of the fella from the original strip: 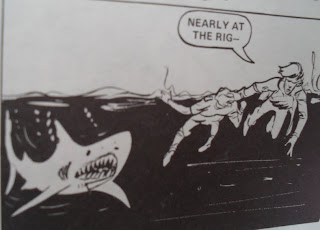 Its odd and frankly quite rubbish. And quite clearly not done by Sola. The only reasons i can think of for having such a bizarre depiction is (A) Hookjaw was never in the panel originally and someone in Editorial decided he should be, (B) He was in it but maybe too small to look threatening?
Anyway, in the new version, the colouring does a great job in breaking up that flat white: 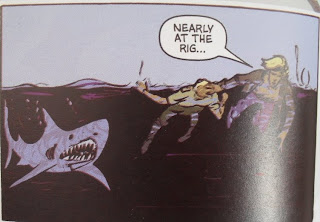 And not making it too noticible. And, comparing the two, again something that wouldn't be noticed any other time pops up - the difference between "at the rig -" and "at the rig..."
I LOVE the other comparision:
the original "AAGH!": 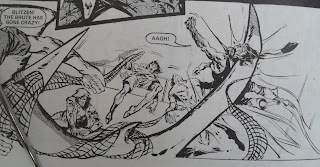 changed over to a much, much better "AAAAIEEE!": 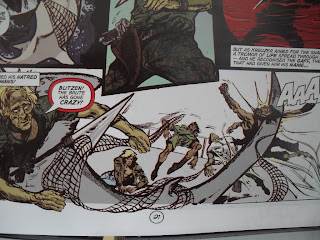 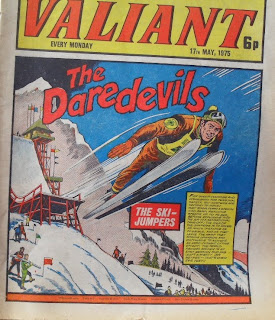 Just bought this issue so lets have a peek at what's of note, yes?
Sergeant Strong: 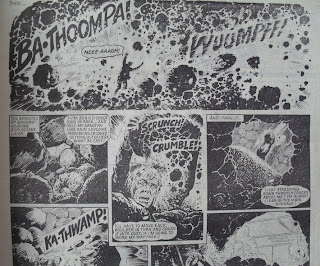 A strip i don't remember at all. He's "Simon Strong", a soldier who's had "an accident in space" which has resulted in him having the strength of 10 men and, for some odd reason, the weight of ten men too...
Odd. And this tale is odd too - its full two pages given over to him climbing up a pipe then being blown up. Twice.
The gimmick (apart from the weight thing) is very similar to Adam Eterno, which id curious as he's in the issue too.
With Adam only being vulnerable to gold, i guess it would only be a matter of time before he came across Jason going after the Golden Fleece.
Which he does here - except, for some bizarre reason, all the names have been changed. Instead of Jason we get "Janex", the "Elgo" replaces Jason's Argos ship and the Golden Fleece is now a "Golden Web.
Curious.
Great tale though, highlight of which is Adam putting himself between the rocks and the prow of the ship to stop it being crushed: 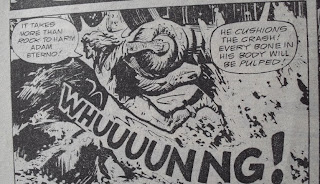 And lastly we've got The Boy Who Went To War, a very "Charley's War" tale set in WW2 though but still featuring a rather simple lad who lies about his age to join up, has a simpler buddy side-kick, a kindly sergeant and lots of tension in the trenches. 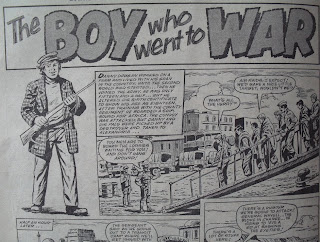 "AIEEEE" WATCH:
No. Whta we do have though is an oft-used expletive across the strips: "NEE-AAAGH!"
Posted by Mangamax at 06:11 No comments: 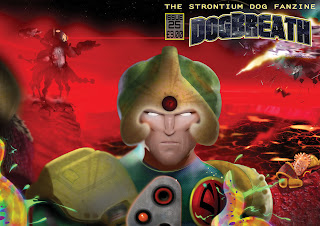 VERY chuffed to get the latest issue of this brillant mag yesterday and see one of my scripts in it, improved massively by the terrific art by Chris Askham.
Cheers Chris!
Available from:
http://thequaequamblog.blogspot.com/
Posted by Mangamax at 23:30 No comments: