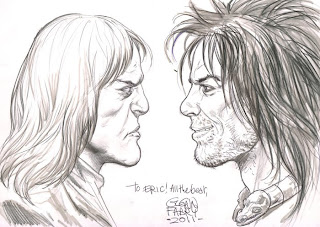 Had a great time last Saturday at a tiny SF convention in a small church hall in Worthing.
What made it great was that both Pat Mills and Glenn Fabry attended. Odd too in that, in the very same weekend of the San Diego Comic Con, two legends should be there rather than there.
Not complaining though - it gave us the whole morning alone with the lovely Glenn Fabry, who did this stunning Adam Eterno meets Slaine for my "Someone Old, Someone New" project, more details here:

And long natters in the afternoon with Pat Mills. Read tons of interviews with the guy, along with Podcasts, and he's always come across as intelligent, articulate and passionate.
Which he was on Saturday. The sheer energy and friendliness of the guy blew away any nervousness meself and the Bronze might've had meeting the bloke responsible for so much we held dear in our formative years and it was a joy to sit there and listen to him and see too that he was interested in what we had to say.
Topics included, unsurprisngly, the genesis of Hookjaw, the history past and present of Flesh and the genius of Ken Reid.
Pat also talked of the future of the strips he's writing at the moment and it was a bit of surprise, knowing what a stickler and how thorough he is, to hear he's in some cases only the outline of some of the final oucomes.
Case in point, Savage. He'd like to do a tale set after the liberation of Britain, when Bill has no further use and goes back to being a taxi driver, bitter and twisted.
As we'd been discussing the merits of having all his tales set in one universe and how he MUST show how Howard Quartz in Savage becomes "Mr Ten Percent", the brain in a robot body of Ro-Busters, i pipped up with how, in Ro-Busters, there was was a robot character who's a human shaped taxi - the fare simply sits on a saddle on his back.
And maybe Savage is real hacked off when they're introduced and loses his livlihood from these robot newcomers muscling in.
How chuffed was i when Pat says he'd forgotten about that and it was a good idea. Chuffed indeed - be even more so if one's called Eric.
Anyway, a fantastic day. Just wish we could've been there for the Sunday too.
Posted by Mangamax at 12:49 No comments: 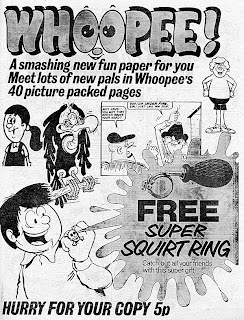 A free gift that seemed to pop up all over the place, given away with various titles over the years.
Where the heck did they come from? Was there a whacking great warehouse full of them somewhere and a consignment was occasionally let out?
I never once saw their like in the many joke shops around in the 70's, just as free gifts. And you never see them now.
So, did the warehouse run empty - or did someone loose the key and even now there's crates full of them stored in vast Raiders Of The Lost Ark storage unit, waiting to be unleashed on a new generation of nippers.
Posted by Mangamax at 13:22 No comments:

Black Max - coming to an end 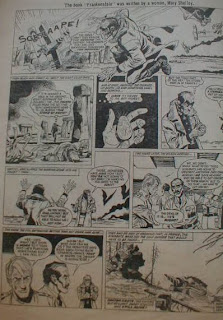 Of course, am a massive MASSIVE fan of the strip - but have never seen the last ever episode.
I know, i know, that's not much of a fan really. But there's a heck of a lot of episodes to track down - and when i were 10 (and now) each installment had enough thrills to sustain me and i didn't really need to collect them each week to appreciate what was going on.
And i've, still, something to look forward to.
I know the end is soon here in May '72 and that eventually he snuffs it, as born out in the Demon Dwarf sequel, and it sure has changed tack by this point.
Long gone is Wilson's mission to prove that he's not barking mad, going on and on about the German fighter ace who has a squadron of Giant Bats at his command, but no-one believes him.
Here, in just THREE pages we've got:
Max under arrest in England for war crimes,
his two huge King Bats rescuing him, only to try to eat him,
Wilson teaming up with Max to try and end them once and for all,
and the Demon Dwarf re-surfacing in his Mole-like tunneling machine.
Curiously, we also have Max being dropped by the Bats at Stonehenge and finding that one of the crashed planes had "... gouged a hole in the ground... right alongside the pillars! The... The FOURTH pillar from the setting sun! Somewhere near it... is buried THE STONE OF KOTH!". Which he's mighty happy to then dig up as its "... The key to the Bat People!"
So there we have it - the first sign that things are about to change tack once again and we'll be soon seeing the Bat People - huge, manlike (including todgers) creatures with Bat faces.
Reading this far in, it does make you wonder if the writers had this in mind all along - to have Max start with a solitary Bat, then a squadron of them, then the King Btas, then the Bat People.
Or were they making it up as they went along?
Posted by Mangamax at 10:06 No comments: 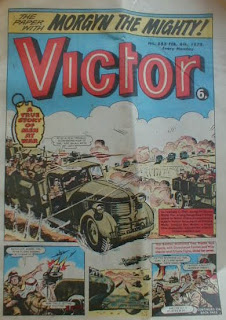 Just bought a couple of Lion & Thunder's and they came with a couple of Victor's too.
Never was a fan of the title, hazily remembering it for not having any decent art or stories.
Boy, was i right - a truly duff issue, with absolutely nothing to say for it.
If i DID have to though, i'd say this front and back page "true story of men of war" is entertaining. But for all the wrong reasons.
So we've a two page summation of i'm guessing a real event. But i'm pretty sure, if it did happen, dialogue didn't actually go as follows:
"We're in dead trouble!.." exclaims the guy on the machine gun, "... Outnumbered four to one. Give 'em all we've got!"
"You bet!" is the cheery response from a squaddie mate.
"Wow! This is getting exciting!" says the numbskull machine gunner as the Italian planes zoom in.
Pretty unrealistic for a true tale, i'm sure you'll agree.
But then we have this jaw dropping exchange as they dive for cover:
"I'm hurt! A bullet nicked my throat" says one, who can't be too hurt if he can moan about it.
And the retort from a comrade: "And i've got a splinter in me".
Diddums.
Really, that's the highlight and its all downhill from there.
Don't think i'll be seeking out the next issue.
Posted by Mangamax at 07:00 No comments:

Also in the issue that has Adam Eterno taking to the skies, we also have this classic episode from "Spider v The Android Emperor", with him being his usual arrogant self - until realising that the guy he's up against isn't all he seems. Its a stunning piece of art, best seen here where we get the quite unnerving sight of Maddox's tentacles flaying about and a rare shot of the Spider actually worried and unsure. 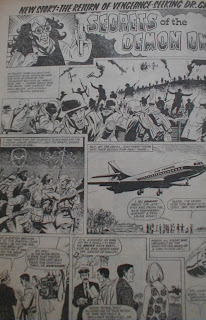 We've also got the start of the Black max sequel, "Secrets Of The Demon Dwarf". I didn't care for this at all, what with having no Max in it and the then present day setting. Its a nice idea though - with Gratz awakening not from his months long suspended animation while he waits for the coast to clear, and waking up in the 70's.
Deciding then and there that he will take to the battle to England itself (without stopping i guess to see whether the Great War was still going on), he arrives the follwing day in his very Tnunderbird Mole-like device.
So, he's attacking England with a tunneling machine.
Does he target a power station?
army base?
10 Downing Street?
Buckingham Palace?
No, he begins his reign of terror by surfacing in Piccadilly Circus. And knocks a car over. That's it. Along with the boast: "This is nothing Englanders! This is only... THE BEGINNING!"
What's next then? Nudge a double decker? Squash a bobby?
Hmmmm... Not what i'd call a cliffhanger really.
Posted by Mangamax at 04:33 1 comment: 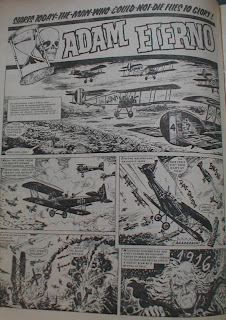 Just been reading an Oct 1972 Lion & Thunder and we have the start of a new Eterno story set in WW1, with brilliantly evocative artwork from Font, up there with Joe Colquhoun's "Charleys War" in my opinion.
Its unusual in that (A) for the first time i've read the fella, he doesn't have any gold threats in the opening instaallment (B) He actually uses technology, climbing into a cockpit and taking off. And, in typical unsubtle 70's setting up, rather clumsily tips the reader off as to what's about to occur:
"In my life of centuries i have learned to do most things. I am no stranger to FLYING MACHINES." he mutters as he appears,
"By Kalizar, the machine must NOT fall in to enemy hands!" he postulates
"Time has not dulled my knowledge of engines and flying. Earlier travels have taken me both to future and past... But this skill is still with me!" he spouts as he takes off.
Subtle, not.
Here i've had him as a bit of a clod all these years and now its seems he can fly and waffle at the same time. And if he can do that, presumably i'll be coming across tales where he's a Formula One driver or whatever 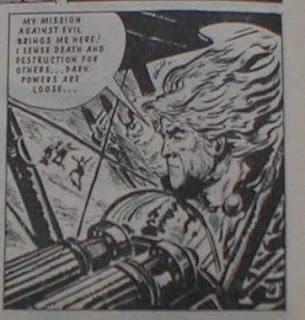 Posted by Mangamax at 05:09 No comments: 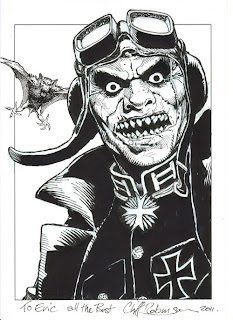 I've just started up a new Blog that i'm guessing you'll be very interested in.
Its... Heck, just mosey on over and feast your eyeballs: