Great episodes of Max and Eterno in this issue.
Not much in the way of the cursed Wilson in "Black Max", most of the story given over to the brainwashing of a captured British airman by Max. Its terrific stuff, my favourite being the fantastic perspective shot, done almost in widescreen, giving it an almost cinematic feel to it.
And over with "Adam Eterno", the fella is tied to a sacred monument and is about to be pierced by a bunch of gold-tipped, American indian spears. What does he do? Pull the whole thing down on top of himself to have it act as a shield. Brilliant! 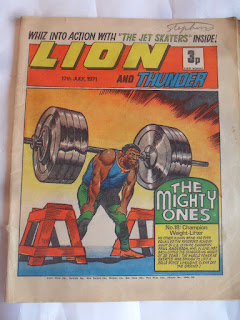 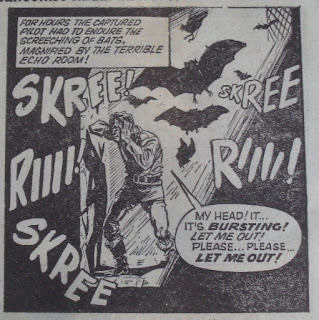 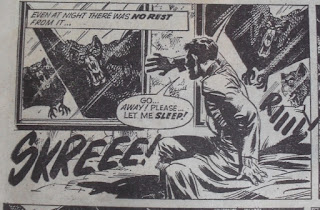 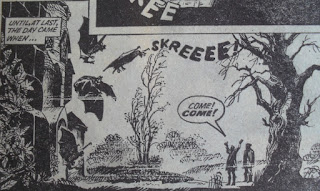 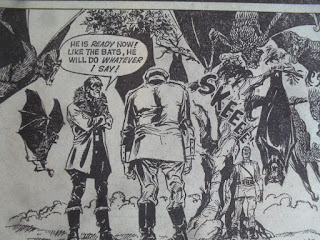 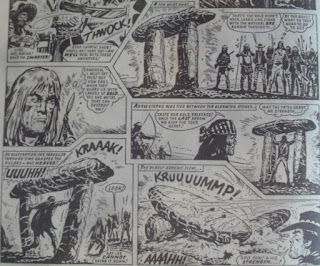 So, after a long long countdown, here he is, the 9 year-old me's top character in this most classic of annuals, Aquavenger!
Before even re-reading the tale, i can see why from the rogues gallery at the front of the book - he looks great, the most superhero-y of them all, and that's a neat shade of green.
Reading the tale, i think the younger me would have been enthralled but, now, its all a bit silly:
Bob Shane in the past had rescued some old bloke drifting in a storm, clinging to a bit of palm hut,
turns out the old codger is Neuptunius. Hmmmmm...
"a recluse possessed of ageless powers". Double hmmmm...
who, as thanks, gives Bob "unlimited power in the crusade against the powers of darkness!"
Then promptly buggers off without explaining why someone so powerful was near drowning like that, who he was, where he was going or anything. Thrice times hmmmm...
Anyway, so there's Bob now a superhero. All he's got to do is shout "Aquavenger!" and he transforms into the titular hero.
Does he position himself in society best suited to battle the "powers of darkness"? Nope, he becomes skipper of a rusty old tub. Eh?
But still gets an adventure in just in time for this annual, as niftly clad frogmen attack his ship and warn Bob and and his mate to stay away from the area.
Turns out "Admiral Nemesis" has a dastardly plan to rob New York by immobilising everyone with his nerve gas, a plan he's quite happy to tell our hero about as he then chucks him into the tank that houses his per giant squid.
Of course Aquavenger defeats them all and we have a happy ending, and i'm left thinking it was all good fun, but it ain't 'arf derivitive.
I was too young back then to know as i hadn't read them, but there's clear parallels with both Aquaman and Shazam in this strip, and i think i rated it tops not only because of the excellent art, but also that the character is similar to the very early Anime, Marine Boy which i certainly knew by then.
Anyway, that's my top hero, one i read endlessly, pouring over the artwork, with one panel i was particualy fascinated by - the almost last one showing the come-uppance of Nemesis, who's so furious, his eyes bulge and he seems to be scratching his hair so much his hats falling off. 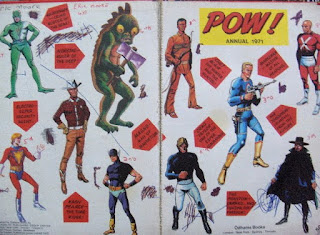 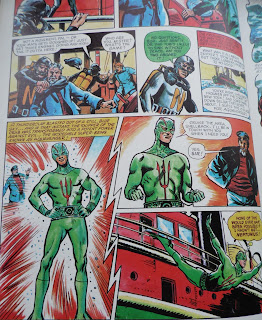 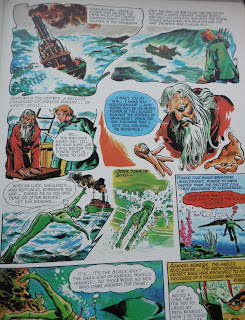 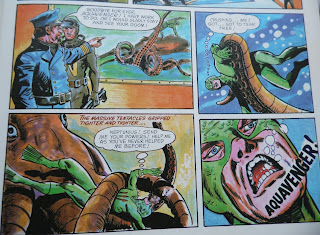 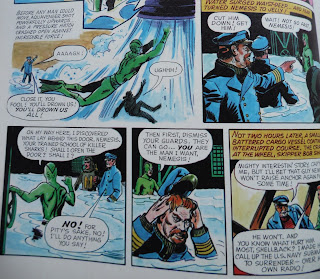 At Number 2 we have the story of Magno, and what an odd story it is.
Sandy Laker is going home to London after graduating at a northern university (totally unnecessary info, but what the hey) and finds a couple of masked guys breaking into his Dad's shop when he gets there.
He has a fight with them, sees them off, gets into a car chase with them,
then:
with no explanation given then nor later in the story, a UFO appears, which shines a light on the two cars,
the cars crash, Sandy is picked up by a beam from the craft before his car explodes.
And finds he's become a human magnet.
And just accepts it - no ruesing on how he got the powers, where the ship came from, why it did what it did, nothing.
Instead he vows vengeance on the men who did his Dad wrong, who are apparently lead by "The Mask".
So he makes himself a natty suit, decides he's now MAGNO, and goes after the Mask.
The Mask indeed does wear a mask, but, again, no explanation is given to the why's of why he's like that.
And there follows a humdrum chase sequence once he's found the villains, topped in the Mask being captured...
but not unmasked.
And the story ends there.
If its true that these tales in the annual where try-outs for a set of on-going strips, it'd be nice to know that the origin of the UFO and the identity of the Mask would have been resolved. 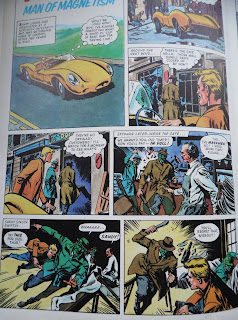 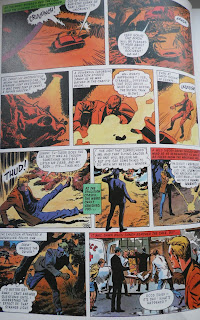 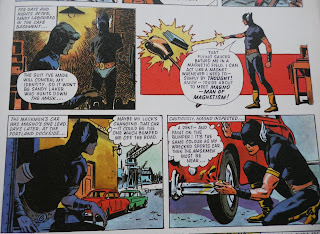 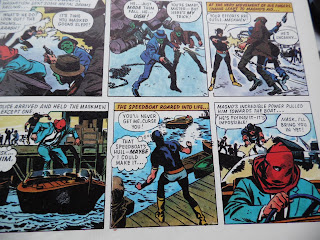 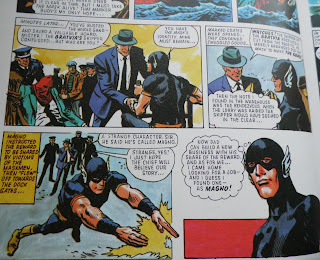 I haven't collected 2000AD for a good few years now - i just don't find a lot of the strips engaging, and Judge Dredd is always so serious and grim and not really what i'm after for a bit of comicy escapism.
The nearest i get to it is to by the occasional graphic novel, have a peep though the latest Prog when in WH Smiths and to but the end of year special, just to see what things are like.
Very pleased this year to nab me one, as its proper Old School Thrill Power:
Ian Kennedy back for the wraparound cover!
neatly designed snowmen villains in Dredd - just snowmen, as silly as that with no deep meaning of hidden plot behind it,
great 80's style art on Bad Company,
Clint Langley nodding to the past nicely, with Hammerstien in the accurate brown colours, the return of Dr Feelyggod, and even the robot Overseers are spot-on accurate,
Jesus Redondo back! And drawing Tharg!
and Johnny Alpha's mates back together.
Eee by gum, its like its 1980 all over again! 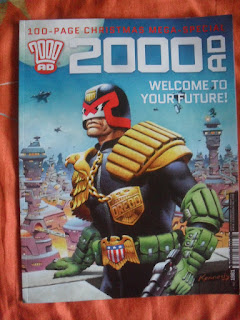 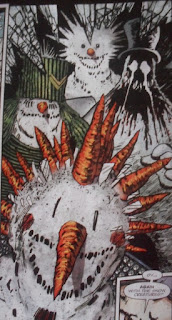 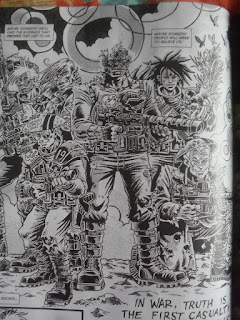 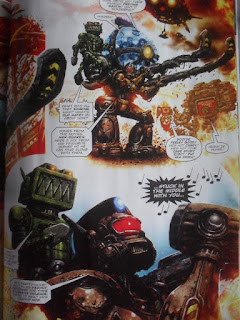 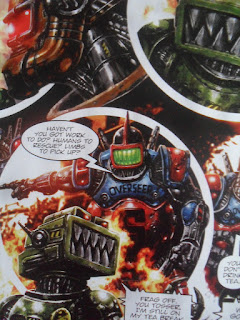 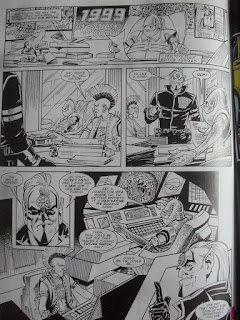 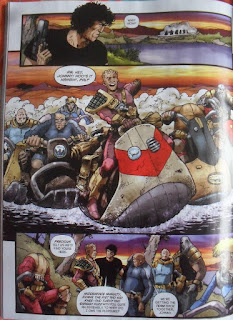 Watched this yesterday and i heartily recommend it to any Squaxx, no matter what point you jumped on board.
Be warned though, the tales of the abuse of original art may reduce you to tears *sob* *sniffle* 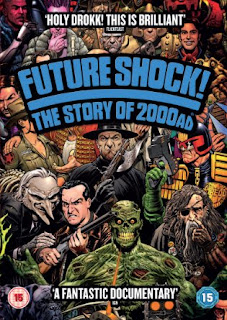 ... and Bertie is one happy Biog to see himself in print. 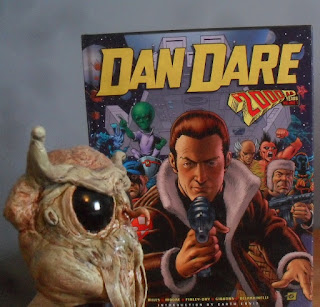